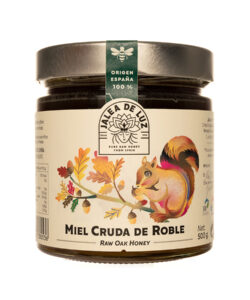 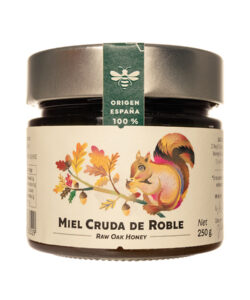 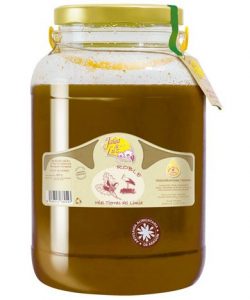 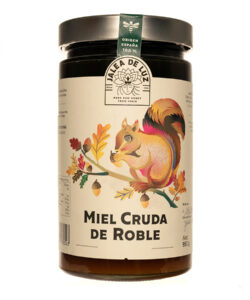 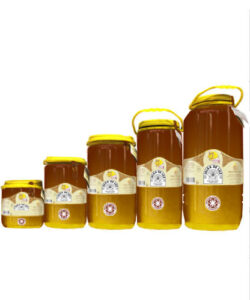 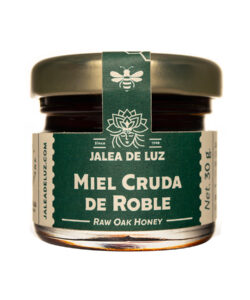 The harvested bees during the end of the summer, giving rise to a unique composition based mainly in rich mielatos, from secretions resinous exudes the oak (Quercus robur) as a plant species more representative; to a lesser extent, the pollen and nectar of the flowers of heather (Erica sp), chestnut (Castanea sativa), and species growth habit, low, undress this exquisite and sweet hodgepodge mountain of intense dark color.

Like the rest of our hive products (honeys and derivatives (pollen, propolis, royal jelly..)), we speak of a traditional natural oak honey collected by our bees in wild wooded areas, which has excellent qualities:

• Raw: has not been subjected to processes of overheating (more than 40 º) or pasteurization, so it preserves immaculate all vitamins, nutrients and enzymes, as well as their organoleptic qualities
• Free of filtering processes: thus we preserve all the natural qualities of the plant species of origin, thus obtaining a natural product of first quality
• Pure: it is produced by bees releasing pollen and nectar wild flowers and secretions of sucking plants and insects, to then proceed to its transformation and storage in the honeycombs inside the hive; it is therefore a 100% pure honey, which maintains its degree of natural essence at all times.
• No added sugars: contains natural sugars typical of unadulterated natural honey, keeping as the bee produces it in the hive.
• Not homogenized: for a honey to maintain all its attributes, we exclude in our process the mixing of natural honeys from different geographical or floral origins, because our permanent objective is to maintain the essence and purity from its origin to the palate of the final consumer.

The natural oak honeys collected by our bees have unique qualities, so it is advisable to take them directly, tasting them inside the mouth as long as possible before ingesting them. To make them more manageable in those cases that are preferred diluted, it is recommended at most, warm the "bain-marie" to temperature that never exceeds 40 º to avoid the loss of aributes.

Oak Honey, where does it come from?

Oak Honey is produced by bees, as a result of libation to extract pollen and nectar from the flowers of predominant plant species, such as oak (Quercus robur), Heather varieties (Erica sp), Chestnut (Castanea sativa) and varied native wild flora, adding to this sweet floral composition resinous substances several shrubby or tree species that are collected by the pecoreadoras of the hive.

The most representative species is the oak, a stunning deciduous tree of wide glass that can reach more than 40 m. of height; it has a trunk grayish off-white (tending to brownish in longevity), thick, erect and woody with clefts, longitudinal brush of irregular shapes, and leaves alternate, broad and lobed, of eye-catching bright green in the beam; emits male flowers in catkins hanging fruit in the form of acorns oval with coverage of scales almost flat.

The tree called Oak was considered an ancestral paradigm of strength, vigor and perseverance in the spirit. The name robur has the same Indo-European root "reudh" as the Latin adjective ruber (ruber =red , from the Latin vulgar rōbore, accusative of rōbur). In fact the Romans distinguished between Oaks (Robur), holm oaks (Ilex) and cork oak (Suber), being Linnaeus who later gathered those trees in a single genus, Quercus.

There is knowledge of Oak fossils since preterite times during the Lower Cretaceous period.
The origin of the word quercus is Celtic and means 'beautiful tree'; the Duir, as they called it, had a place of honor in this ancient culture (the word" Druid "meant in Gaelic" the one who observes the oak", as they were a source of inspiration for sacred men and women, even some magical meetings were held around it). His legend quotes that the " Oak King "ruled in the luminous half of the year and the" Holly King " in the twilight. Mythology also highlights that there was a triad of trees consecrated to fairies, oak, ash and Hawthorn, so that when they appeared together in the same place, they danced around them making themselves visible to the human eye.
Among other literary quotations, it is worth mentioning that of the Spanish writer Fernando de Rojas alluding to the fortress of the Oak in "La Celestina": "a single Blow does not knock down an oak...", likewise, the poet and playwright Tirso De Molina commented that this tree had never sheltered traitors or confesses.
The famous tree of Gernika (Biscay) was a centenary Oak, symbol of the freedoms of the Basque people, under which assemblies were held and since the fourteenth century the Castilian Kings swore under it respect their laws.
Of Eurasian origin, it comprises more than 500 species distributed throughout Europe, Western Asia, North and South America. In the Iberian Peninsula they grow in soils with constant humidity, so they abound spontaneously in mountain ranges with high hygrometry and in the northernmost regions.
Its wood was an essential material in shipbuilding, production of sleepers for Railways and charcoal, in cooperage and cabinets, etc..; its fruit is used as fodder for cattle, its sweet honey as a food supplement and its bark and gills as tannins.

orchard of Oak Honey and walnuts
Previously cook in a saucepan a taco of hake, parsley, a tablet of natural vegetable broth, 4 carrots, 1 sweet potato, 2 leeks, a pinch of celery, virgin olive oil, a piece of pumpkin ducle, and a potato; once at its point, strain the cooked and reserve the clean broth that we will apply at the bottom of the baking sheet.
Cut two zucchini, a potato and a piece of pumpkin into thick pieces; add a few strips of green pepper, red pepper and purple eggplant around. Add a little butter, Oak Honey, a pinch of dill and turmeric, sea salt and split nuts peeled above the set. Bake at 200 degrees until the vegetables are ready.
We finally decorate with orange blossom flowers at the top of the vegetable tacos.
We're out and done! We already have in our kitchen a simple, sweet and delicious dish of ancestral and intense aroma.

The rating of jaleadeluz.com at Trustprofile Reviews is 9.9/10 based on 33 reviews.
We use cookies to ensure that we give the best user experience on our website. If you continue to use this site we will assume that you agree.I AgreeMore info