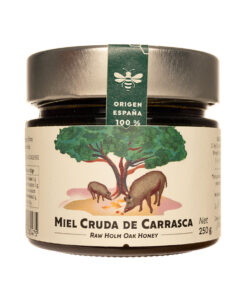 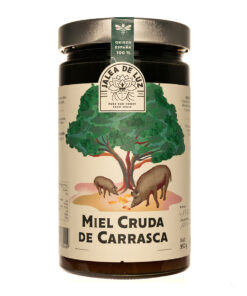 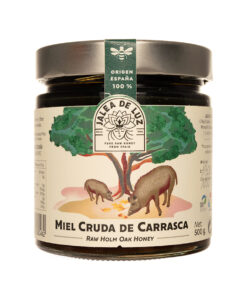 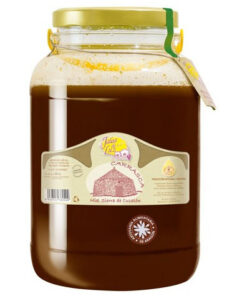 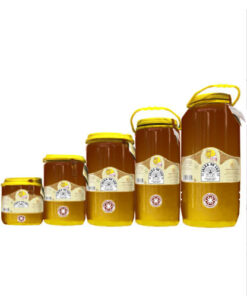 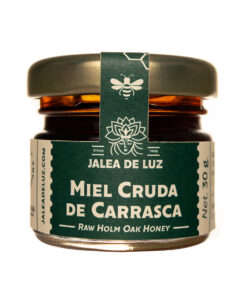 Handmade natural honey essentially composed of valuable myelatos if carrasca or oak predominates, giving it a very dark color blackish mahogany, sometimes drifting towards ochre-brownish tones when the flower of plants such as thyme and Heather overlap in time and space.

Intense and persistent sweet taste, it enjoys a strong, compact, asilvestrado aroma that does not leave the consumer indifferent.
Because of its majority resinous composition, it lacks almost completely crystallization, forming a dense and strong honey, malleable at the same time, which enjoys a pleasant texture for the palate.

The pure honey of carrasca meets all the premises of a natural product excelso and healthy, as well as our wide range of honeys and derivatives (propolis, royal jelly, pollen,..):

• Raw: our pure Oak Honey has not been subjected to processes of overheating (more than 40 º) or pasteurization, keeping intact all vitamins, enzymes and minerals of origin, as well as their organoleptic qualities.
• Pure: produced by bees after libation of pollen and floral nectar, and sometimes secretions of sucking plants and insects, through a process in which no factors other than those that nature itself provides intervene, thus obtaining an authentic honey of unmatched quality.
• Unfiltered: our handling mode does not allow any filtering, being the only way to maintain all the natural qualities of origin and thus achieve an excellent natural product unparalleled.
• Non-homogenized: we never mix natural honeydew from different geographical or floral sources, in order to maintain the original essence and purity until the end of the process.
• No added sugars: contains no additives, remaining virgin as the bee produces in the colmenar, containing intact all the natural sugars typical of unadulterated natural honey.

The natural Oak Honeys collected by our bees have unique qualities, being advisable to take them directly, tasting them inside the mouth as long as possible before ingesting them. To make them more manageable in those cases that are preferred diluted, it is recommended at most, warm the "bain-marie" to temperature that never exceeds 40 º to avoid the loss of attributes.

Where does it come from?

This exquisite natural handmade honey, is produced by bees as a result of libation to extract pollen and nectar from the flowers of thyme (Thymus vulgaris), Heather (Erica SP varieties), native wild flora varied from the Aragonese forest and late myelates mostly from the secretions of carrasca (Quercus L.) and some sucking insects.

The coscojo, carrasca, holm oak or chaparro, is a perennial shrub that usually reaches 2 m in height, although it can reach tree in favorable grounds; it has very branched and intertwined stems, with simple alternating bright green leaves with wavy spiny edge.
Its tiny yellow flowers hatch in spring, then give rise to the fruit (Acorn) endowed with a single seed and external coriaceous layer that matures at the end of summer, early autumn, being usually bitter taste.
The oak or carrasca has its habitat of origin throughout the Mediterranean basin, mostly where dry and bright slopes predominate, although it perfectly tolerates some continental climates..

The word Oak comes from the deformation of the vulgar Latin "Ilicina" and in turn from Ilex /ilicis, from the pre-Indo-European lexicon (in Celtic language Hercynia= territory of dense forest in the Eastern Region of the Danube); in classical Latin it is called "Quercus", term of Indo-European origin (from the Celtic word Quercuez" = elegant tree), initially applied to Oak, and later extended to all trees or shrubs that produced Acorns or fruits in the form of glans. Its common name carrasca, has pre-Roman root "kar-SCA".

Historically, already in the Celtiberian Hispania, the varieties of carrasca or oak occupied large expanses in the form of vast forests. In Ancient Greece, transcendent meetings were held under an oak tree, because according to them it represented justice and strength.
The Oak Forest was a sacred place for the worship of divinities in various cultures, especially in Celtic, where the initiatic rite of the Druids ("those who know the oak" or "men of the Oak") was based on the sacred symbolism of the Oak.
In the oracle of Dodona (population located between the current Greece and Albania), ancient and famous sanctuary dedicated to Zeus (God of lightning, thunder, and sky), practiced divination and stated that ”of the oak, you must remove when it threatens a storm, “ as the priests predicted through the rustling leaves of the oak sacred. There, Ulysses (as Homer mentions in ”The Iliad ”) asked Zeus to return safely to Ithaca and sought to learn his will in the Great Oak – Oak.
In Ancient Rome, there was a large holm oak near Lake NEMI dedicated to Jupiter (Zeus), ruled by a forest king who carried on his head a crown of oak leaves, distinctive much older than laurel.
In Germania, the holm oaks that shaded the amphitheaters were consecrated to Thor (Donar, God of thunder and lightning ).
During the period of romanticism it was the Oak symbol of unwavering strength .
With regard to the uses of oak, it covers a wide range of uses: production of wood and charcoal, wood, tools, culinary recipes, animal food, etc..

Squid with Honey
We clean 6 medium-sized squid, removing the tentacles from it. Finely chop these and fry them slowly in virgin olive oil with tender onion from sources and a glass pepper also cut into small pieces; during the process we remove and apply a pinch of sea salt, crushed rosemary and turmeric in equal parts.

We also fry the body of squid but chopped thick and only with olive oil in the pan.
Cut into thin slices 3 cloves of garlic, a Purple Onion previously caramelized in the pan and mix them in a bowl with a drizzle of apple vinegar and a small spoon of squeezed lemon.
Put in a hot saucepan, 15 grs of natural honey of carrasca, 15 grs of natural honey of eucalyptus and another 15 grs of natural honey of Chestnut and carrot juice, to reduce until it acquires dense consistency, eliminating to the maximum the aqueous component; once the mixture is ready, add it to the bowl with the rest of food.
We spread all the scrambled on the basis of the dish, bring the body of the squid on top and Intermix the crushing of tentacles around. On these, place the Rings of chives, a few pieces of green raw pepper, a few flowers of orange blossom and sprinkle on top parsley and Rosemary powder.
These are very balanced recipes suitable to take in any season of the year.
Nuestra puntuación en jaleadeluz.com a Valoraciones Trustprofile es 9.9/10 basado en 68 opiniones.