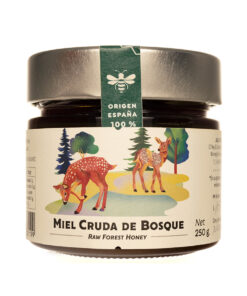 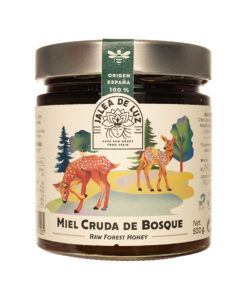 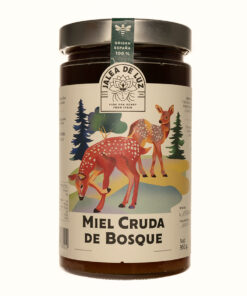 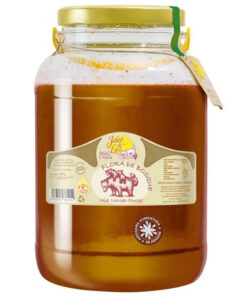 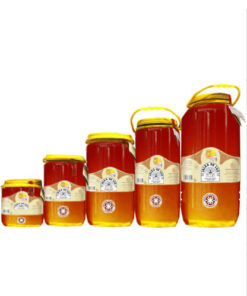 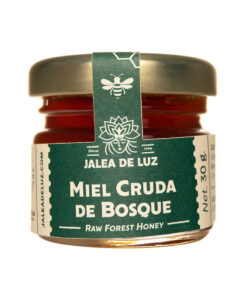 Highlight its intense dark brown color of varying shades depending on the floral predominance at the time of collection, being able to acquire in certain occasions brushstrokes close to Amber. It has an extremely malleable creamy soft consistency and very weak crystallization, which facilitates its handling in culinary tasks.

Its taste is sweet, moderately intense and with a traditional Woody touch accompanied by slightly salty yellowish notes in the retronasal, sometimes predominating the strong bitter typical of the predominant flora. Intense traditional aroma wonderfully penetrating, with certain similarities to the neighboring eucalyptus but not as fragrant as the orange blossom.
It is very rich in various minerals (Fe, K, Ca, P and Mg), vitamin C and antioxidants.

Like our entire range of honeys and derivatives (pollen, propolis,..), the selected natural forest honey is collected by our bees in wild areas of the peninsular northwest, meeting all the healthy requirements to be an excellent natural product of supreme quality:

• Pure: it is produced by bees releasing pollen and nectar from flowers, and secretions of sucking plants and insects, to then begin its transformation and storage in the cells of the boxes of the hive; that is why in this natural process do not participate foreign factors to which nature itself provides.
• Not homogenized: we never mix pieces of honeydew, because our permanent objective is to maintain the essence and purity from its origin to the palate of the final consumer, in order to put at your disposal all the qualities of a pure honey. Each honey content of each can extracted from the apiary is transferred directly independently to the final container individually, thus avoiding inappropriate mixtures.
• Raw: has not been subjected to processes of overheating (more than 40 º) or pasteurization; this mode of work allows to preserve intact all the vitamins, nutrients and enzymes that has raw honey, as well as its taste and olfactory qualities •
• Unfiltered: we never subject it to filtering processes to preserve all its natural qualities, thus achieving an excellent natural product on which we can fully identify the area of origin
• No added sugars: our honey is pure essence, just as the bee produces it in the hive, thus containing natural sugars typical of unadulterated natural honey.

The natural honey of forest flowers collected by our bees have unique qualities, so it is advisable to take it directly, savoring them inside the mouth as long as possible before ingesting them. To make them more manageable in those cases that are preferred diluted, it is recommended at most, warm the "bain-marie" to temperature that never exceeds 40 º to avoid the loss of attributes.

Forest Flora Honey, where does it come from?

The craft Forest Flora honey, is produced as a result of the hives by the bees to extract pollen and nectar in the flowers of heather (Calluna vulgaris), chestnut (Castanea sativa), blackberries (Rubus sp) and wild flora of forest native varied, adding to this sweet floral composition resinous substances a number of shrubby species or trees which are harvested by the pecoreadoras.

Basically, the wild melliferous vegetation moves in the climatic strata colino and montano, where the aforementioned species inhabit around rivers and mountain slopes.
It contains lanceolate leaves sawn slightly furry on the underside, and yellowish flowers grouped into erect amentos, which will give rise to fruits with a slightly bitter taste in The Shape of a dome, usually comprising 2 to 3 Dark Brown chestnuts (achenes), whose inner shell is velvety..
It is accompanied by more chaparrudos, Heather (subarbustos very branched under upright, carrying small leaves and multitude of purple pink flowers, occupying acidophilic and sterile soils), brambles (rustic species of aculeado stems, alternate leaves, solitary flowers or grouped in corybos or panicles, and fleshy fruits consisting of numerous very small drupes linked to each other) and other wild forest species. In more continental areas, forest species are complemented by Mediterranean plants that inhabit limestone mountain lands, such as Rosemary (Rosmarinus officinalis), thyme (Thymus vulgaris,..), holm oak (Quercus), etc.

The chestnut trees have their origin in southern Europe and Asia Minor, coexisting with aromatic species of lowland such as thyme, rosemary, lavender, Oak, etc.. being introduced progressively in many countries of the world (Portugal, French central Massif, Italy, etc...) and even in several regions of the Iberian peninsula itself.

The generic name " Castanea "comes from the Greek" χάστανον "and after the Latin" castănaa, -ae", name of Chestnut and Chestnut, also called" castanea nux " (the chestnut nut), although another possible origin would be the city of Asia Minor called Castanaea, -ae or Chestnut, -ae (also possibly from the Armenian name of this tree). Sativa: from Latin which means "cultivated".
The first written reference dates from the first century BC, when Xenophon spoke of " foods similar to smooth dark nuts without cleft, boiled and cooked as bread, which stored some villages near the Black Sea in their barns "(widely used by soldiers of these villages, whom he considered barbarians).
In the First Century, Julio Moderato Columela explained in detail the details of the traditional extensive planting of chestnut trees at the agricultural level. From this time date very complete handmade culinary recipes, regarding the use of Chestnut as a base food (Apicio and Quinto Gargilio Marcial) and mentions of various applications (by the Greek Galen of Pergamum).
In the twelfth century, Abu Zacaria described it, among other trees of the Iberian Peninsula. Already in the Middle Ages it is known the subsistence based on the cultivation of chestnut trees by many Italian peoples. In later centuries, many French villages used the harvested Chestnut, as artisanal bread with a slightly bitter taste, replacing other scarce foods at the time.
The Spanish agronomist Gabriel Alonso De Herrera mentioned the cultivation of this species and some of the qualities of its fruit, as well as the hardness of its wood (firm as iron).
With the arrival in Europe of corn and potato, was in decline its use as a staple food, even subsisting only in local festivals of Celtic origin in several places of the world (northern Spain,..), to celebrate the arrival of Chestnut.
As for the heather, the generic name Calluna is of Greek origin (it means "sweep“, since the plant was very used to make brooms ) and” vulgaris" (common) comes from Latin. The Bush (Rubus sp) whose generic name comes from the Latin meaning 'Bush’ or’ raspberry' or "ruber= red", being mentioned in a very representative way in the ancient biblical writings.
The plant heather is a native of mediterranean Europe (widely extended later to northern countries such as Scotland, Ireland, Sweden, Norway,...), north Africa and America, where it thrives in poor soils, and acidic as bogs, moors and heathland; its evolution was based on the colonization of the western Mediterranean from the east of Africa and Arabia, in a time set between the periods of the Upper Miocene and Upper Pleistocene.
Has had an important place throughout history in various cultures for its many uses: it is used to strengthen and insulate the roofs of the houses, as a bed of livestock, production of fuel and derivatives, traditional manufacture of baskets and ropes, and as mentioned above, to make brooms

hake with mushrooms and forest honey
Put in a pan 2 tablespoons of extra virgin olive oil, sear on both sides, five pieces of fillet of fresh hake, while in another pan, apply the same amount of oil, 3 cloves of garlic, a pinch of thyme, a little rosemary and mixed mushrooms, stir for a few minutes; then add corn flour, fish stock and forest honey, pure rich brown, and continue to marinate the mixture in the pan. Ultimately, add very crushed black garlic, finely chopped green beans, sea salt and a little turmeric and pepper.
Allow to cook slowly for about 5 minutes and bring the previously Golden hake loins, so that they sit all together for another 5 minutes. And ... ready!!!!!!
Nuestra puntuación en jaleadeluz.com a Valoraciones Trustprofile es 9.9/10 basado en 68 opiniones.