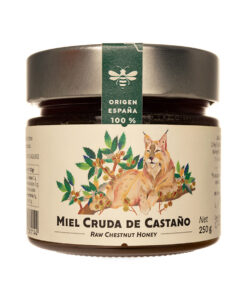 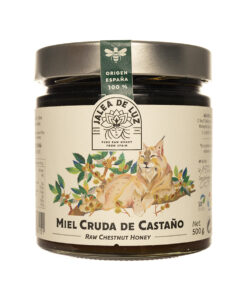 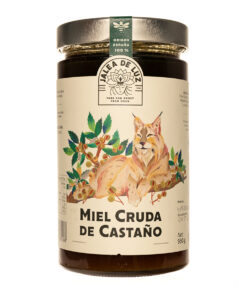 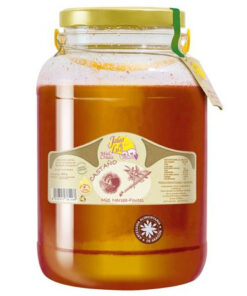 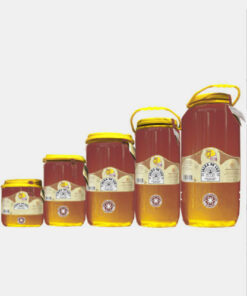 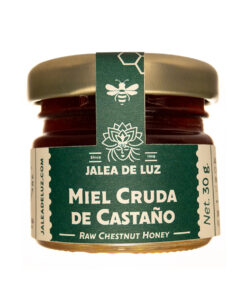 Of very peculiar characteristics in the field of beekeeping, the raw brown honeys have a powerful amber color flowing making dark brown-green hues sometimes and persistent floral aroma with intense ancestral hue that tends to aged wood. It has exquisite sweet taste, hoarding a special touch between bitter and salty depending on the richness of contemporary pollens.

We talk about a natural food that also enjoys a rich composition in vitamins (C), minerals (iron, potassium, calcium, phosphorus, magnesium,..) and antioxidants.
Its crystallization is scarce giving rise to a dense and malleable natural texture.

Like the rest of our range of pure products, the selected natural honey of Chestnut collected by bees, has many virtues, meeting all the requirements that requires an excellent natural product:

• No added sugars: our honey is what it is, just as the bee produces it in the hive, containing only natural sugars typical of a natural honey that has not been subjected to any artificial process.
• Raw: has not been subjected to processes of overheating (more than 40 º) or pasteurization, so it keeps intact all vitamins, nutrients and enzymes, taste and olfactory qualities.
• Pure: it is produced by bees by releasing pollens and nectar of native flora, along with secretions of sucking plants and insects in some cases, transforming them and storing them in the form of pure honey in the honeycomb inside the hive; that is why they do not interact factors alien to those that nature itself grants.
• Not homogenized: we never mix honeydew from different geographical or floral sources, since our ultimate goal is to maintain the essence and purity from its origin to the palate of the final customer.
• Unfiltered: it is never filtered, thus maintaining all the original natural virtues, thus obtaining an exquisite natural product without any alteration.

The natural Chestnut Honeybees collected by our bees have unique virtues, so if we want to make the most of them, it is advisable to take them directly, tasting them inside the mouth as long as possible before ingesting them. To make them more manageable in those cases that are preferred diluted, it is recommended at most, warm the "bain-marie" to temperature that never exceeds 40 º to avoid the loss of qualities.

Keep in a dry, semi-dark and cool place to keep intact in a natural way all its virtues.

Chestnut Honey, where does it come from?

The natural artisanal Chestnut Honey is produced as a result of the libation to extract pollen and nectar in the chestnut flowers (Castanea sativa) and wild flora of native forest varied by the bees, adding to this sweet floral composition resinous substances several shrubby or tree species that are collected by the pecoreadoras (also used for the production of propolis, etc..).

Basically, the wild melliferous vegetation moves in the climatic strata colino and montano, where they inhabit the aforementioned species around rivers and mountain slopes of northwestern Spain.
We refer to the chestnut trees as a deciduous shrub-arboreal species that can reach even 30 m. in height, with thick and slender trunk with brownish grey bark and firm Wood, darkening in advanced ages; it contains lanceolate leaves sawn slightly hairy on the underside and flowers grouped in erect amentos with domed fruits, usually comprising 2 to 3 chestnuts (achenes) dark brown and bright whose inner shell is velvety.

The generic name "Castanea “comes from the Greek “χάστανον “and after the Latin” castănaa, -ae“, name of Chestnut and Chestnut, also called” castanea nux “(the chestnut nut), although another possible origin would be the city of Asia Minor called” Castanaea, -Ae or Chestnut, -ae", or the Armenian name of this tree. "Sativa": from Latin which means"cultivated". The chestnut trees have their real origin in southern Europe and Asia Minor, being introduced progressively by the Romans and settled in many countries of the world (Portugal, Spain, French central Massif, Italy, etc...) and even in several regions of the Iberian peninsula itself.

Its origin is confusing dating from the first reference written in the first century BC, when Xenophon speaks of " dark colored foods, similar to smooth nuts without cleft, boiled and cooked as bread that stored some villages near the Black Sea in their barns "(widely used by soldiers of these villages, whom he considered barbarians).
In the First Century, Julio Moderato Columela explained in detail the details of the extensive planting of chestnut trees at the agricultural level. From this time date very complete handmade culinary recipes, regarding the use of Chestnut as a base food of relatively bitter taste and strong aroma (Apicio and Quinto Gargilio Marcial) and mentions of its natural qualities by the Greek scholar Galeno De Pergamo.

In the twelfth century, Abu Zacaria described the Botanical characteristics of chestnut trees, among other trees of the Iberian Peninsula. Already in the Middle Ages it is known the subsistence based on the cultivation of chestnut trees by many Italian peoples, both for the consumption of its fruit and for the use of the wood of the tree. In later centuries, many French villages used chestnuts as bread, replacing other scarce foods at the time.

The Spanish agronomist Gabriel Alonso De Herrera mentions the characteristics of its cultivation and some of its properties, as well as the hardness of its wood (firm as iron).
With the arrival in Europe of foods such as corn and potato, was in decline Chestnut as a staple food, even subsisting only in local festivals of Celtic origin in several parts of the world (northern Spain,..) to celebrate the arrival of Chestnut.

Brussels sprouts with Chestnut Honey
Clean half kg Brussels sprouts and put them to cook a casserole with boiling water with a pinch of sea salt, for a quarter of an hour until they are ready, remove and drain.
Fry in another saucepan a few pieces of tofu, quarter half loin of hake split in small tacos, half sweet onion and half chopped green pepper; add the coles to half cooking so that they slowly grow. Add 1 tablespoon of traditional mustard, 10 grs of finely crushed organic pumpkin flower, ground black pepper, 1 pinch of tarragon, 2 tablespoons of raw orange blossom honey and 2 tablespoons of raw Chestnut Honey, stirring over low heat. Remove and finally add a multicromatic pollen granites.
¡Let stand and we already have one of the most colorful and ready-to-serve handmade recipes!!
Nuestra puntuación en jaleadeluz.com a Valoraciones Trustprofile es 9.8/10 basado en 46 opiniones.
We use cookies to ensure that we give the best user experience on our website. If you continue to use this site we will assume that you agree.I AgreeMore info