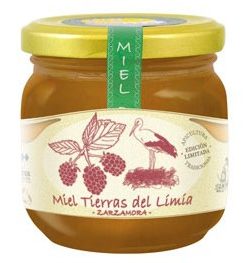 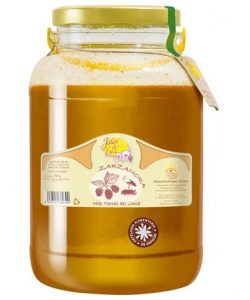 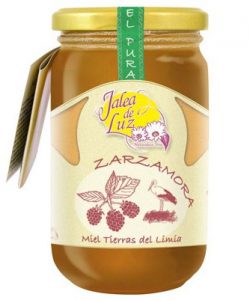 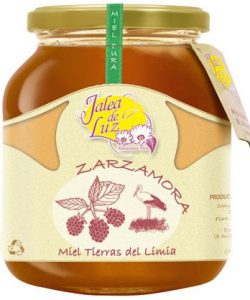 It has a striking light amber color with oily hues, being able to acquire darker shades depending on the floral species that coexist in time and space (Heather, Chestnut, lavender, wild fruit and a wide range of native forest and mountain flowers). It has medium crystallization that can sometimes lead to a separation of natural phases.

This rich honey from nectar and pollen extracted by bees mainly from the flowers of BlackBerry, has a markedly sweet and intensely floral fruity flavor, enjoying at the same time an exclusive finesse typical of the best honeys of our peninsular beekeeping.
It is also an excellent source of vitamins and minerals such as potassium, phosphorus, iron and calcium.

Pure BlackBerry honey, along with other products of our hives (pollen, propolis, royal jelly..), is a traditional natural food supplement collected by our bees in natural places, thus meeting all the requirements that a natural honey should possess:
• Raw: has not been subjected to heating processes (more than 40 degrees) or pasteurization, so it keeps intact all vitamins, nutrients and enzymes. It also retains first-class organoleptic qualities that awaken unimaginable sensations in our senses.
• Pure: it is produced by bees through the libation of pollen and floral nectar, along with secretions of plants and sucking insects in case of late collection, and then proceed to its transformation and storage in the honeycomb cells inside each hive • Therefore, their production is governed by an exclusively natural process.
• Non-homogenized: natural honeys from different geographical or floral sources are never mixed. Our permanent goal is to maintain and transfer the essence and purity of honey from the colmenar to the palate of the consumer.
• UNFILTERED: our honey is never filtered, because by producing it and packaging it as it was in the honeycomb of origin, we obtain an excellent natural product unparalleled.
• No added sugars: our honeys have no additives, possessing only the natural sugars typical of an unadulterated natural product.

The natural BlackBerry honeys collected by our bees have unique values, so if we want to take advantage of all their attributes, it is advisable to take them directly, tasting them inside the mouth as long as possible before ingesting them. To make them more manageable in those cases that are preferred diluted, it is recommended at most, warm the "bain-marie" to temperature that never exceeds 40 º to avoid the loss of qualities.

Blackberry honey, where does it come from?

Natural BlackBerry honey is produced by bees, as a result of libation to extract pollen and nectar from the flowers of predominant plant species, such as BlackBerry (Rubus sp.), Chestnut (Castanea sativa) and native wild flora varied from medium mountain forest, adding to this sweet floral composition resinous substances several shrubby or tree species that are collected by the pecoreadoras of the hive.

The most representative species is the BlackBerry, a perennial shrub with spiny elongated stems that acquires various portes (arched, erect or creeping); its leaves are alternate with lateral or terminal inflorescences in the form of corybos, panicles or solitary pink white. Its fruit is a fleshy polydrupa up to 2 cm in length and variable color.
Chestnut and oak are two usual companions of travel in the orensana mountain, supplemented in some cases with Heather and various wildflowers that provide pollen and nectar of supreme quality. In more arid areas they can coexist, although rarely, with aromatic species such as thyme, lavender (lavender), rosemary, etc., being an unusual exception.

The word zarza is of pre-Roman origin and comes from the ancient "sarza"; some specialists point out that it comes from the Arabic word "SARS", which means thorny plant.

At biblical level, there are references such as the allegory in the choice of a king by the trees, in which the term Bush is used in contrast to the Giants of the forest, to represent the poor protection offered to the Shechemites by Abimelech. They are also cited as part of Edom's desolation and as an illustration to extol the truth that men will be known by their deeds and actions. Finally, and perhaps the most recurrent, it is the time of God's encounter with Moses.

Regarding the word mora, it comes from the vulgar Latin "mora", and in turn from the Latin" morum "(fruit of the tree of the family of the Moraceae or the fruit of the BlackBerry) and" maurus " (dark complexion). This in turn from the Greek " máuros "(black or brown), which designated the inhabitants of ancient Mauritania; even today in present-day Greece," mávros-mávri " is the adjective to designate the color black.
Since the Paleolithic era there is evidence of the presence of brambles in the mountain of the Iberian Peninsula and in other parts of Europe and Asia, growing wild in wetlands, ribazos,....
In Ancient Greece wild blackberries were called "Blood Of Titans", because of their intense red, purple and black color. As for the use of this fruit in culinary aspects, the first written reference is reflected in the work “De re coquinaria” by Apicio (Roman gastronome of the First Century AD), as well as a mention regarding a tea of Bush leaves made by the Romans in the treat of several illnesses.
During the eighteenth century, American explorers and botanists wrote down descriptions of a plant that " grew about 5 or 6 feet in height over fences and shrubs in the form of a vine,” and then went through natural selection processes to achieve dominance and cultivation of this species.
Today, except in some very extreme areas, we can talk about a floral species widely spread in many parts of the planet.

natural ice cream of forest fruits
We dissolve in hot water whole organic sugar cane until total dissolution, then let it cool for an hour and a half.

We finely grind with the mixer very ripe blackberries, raspberries and currants; then strain them so that the hard remnants of seeds, skin, etc., are separated from the pure juice and store this in another container.
We take freshly squeezed natural juice, water with whole-grain sugar, a natural soy yogurt, a tablespoon of Pollen Powder, a tablespoon of pure BlackBerry honey, lemon juice, avocado juice and homogenize everything until you get a uniform fine paste puree type.
Pour the mixture into smaller ice cream molds with stick, and transfer to the freezer.
To aromatize the moment of your enjoyment in good company, place a bowl with a little rosemary, thyme, lavender (lavender), essence of eucalyptus, a flower of Orange Blossom, a pinch of propolis tincture and a few drops of essence of strawberry, all finely crushed and mixed and we already have the miscellaneous essences that will transport us sensorially to different Peninsular enclaves.
Here is the magnificent result: a dessert of attractive color, natural, sweet soft flavor with subtle floral aroma, ideal for the hottest summer days.